Skip to content
WELCOME TO THE WORLD OF BEAUTY SOLUTIONS

Introduce about the Glutathione

Glutathione is an important antioxidant in plants, animals, fungi, and some bacteria and archaea. Glutathione is capable of preventing damage to important cellular components caused by reactive oxygen species such as free radicals, peroxides, lipid peroxides, and heavy metals. It is a tripeptide with a gamma peptide linkage between the carboxyl group of the glutamate side chain and the amine group of cysteine, and the carboxyl group of cysteine is attached by normal peptide linkage to a glycine.

As a premier anti-aging antioxidant, glutathione is widely used to help fight the signs of aging. Used both topically in glutathione creams as well as orally ingested in pill or capsule form, glutathione can yield immense skin health benefits.

Our skin is the first line of defense against infection and disease, this is why it has such a high concentration of antioxidants compared to deeper tissue. Subsequently, when our health is compromised the health and appearance of our skin suffers. This is why free radicals and oxidative damage are the biggest threats to young, healthy looking skin.

By supporting glutathione levels, you are improving the quality of your skin, translating into a healthy glow and a reduction in wrinkles and dry spots. It is also commonly used topically as a skin whitener, because of its ability to reduce melanin production. Melanin is the pigment that gives skin its color, by reducing melanin production you can get the appearance of whiter and sometimes clearer skin. The efficacy of glutathione for skin whitening is a controversial subject, however many experts believe it is effective.

Glutathione is keystone for our immune system, when GSH levels are low, so is our immunity. By boosting GSH levels you are increasing your body’s ability to fight off infection and illness.

When we fall ill or are battling a disease, our glutathione stores are rapidly used up to help combat the problem, making it even more important to boost levels when our health is compromised. By boosting levels and maintaining them, you are preparing your body to deal with illness and infection before it has a chance to take hold and become an issue. So you can think of glutathione as one of the best preventatives as well as an effective treatment for many health conditions.

Everyone is concerned with aging, we want to stay young and vibrant for as long as possible. Well, aging may be inevitable, but feeling old is very preventable.

Free radicals and oxidative damage are some of the leading causes of aging. They damage our cells and bog down our body, leaving us feeling tired, old and generally unhealthy. They also contribute to the many undesirable cosmetic changes that we associate with old age.

Inflammation is deadly, pure and simple. It is considered to be a leading cause of virtually every disease we know of. Yes it is a natural and even healthy immune response, but when it persists longer than necessary it can lead to severe health problems and chronic pain.

The ratio between oxidized and reduced glutathione in the body is indicative of overall toxicity as well as inflammatory response. Low GSH levels are associated with chronic inflammation, mitochondrial superoxide production and oxidative protein / DNA damage.

Individuals with chronic inflammatory problems like rheumatoid arthritis, asthma and psoriasis can relieve the symptoms and pain with anti-inflammatories.

Glutathione is a potent chelator, involved in cellular response, transport and excretion of toxic heavy metals. It is also a biomarker for toxic metal overload.

Chelating heavy metals is absolutely vital to our health, especially as we age. We absorb heavy metals each and every day, through the water we drink, foods we eat and even from amalgam fillings and antiperspirant deodorants.

Minimizing your exposure to these toxic metals can be helpful, but avoiding them altogether is almost impossible. The problem is compounded by the fact that our body is not equipped with the necessary tools to chelate all of these heavy metals, meaning they stick around and accumulate year after year. This is a contributing factor to many neurological and cognitive disorders as well as damaged cellular function.

With ample glutathione levels, the body is capable of excreting these heavy metals from the body, relieving the stress and damage they cause to our cells. If you can couple glutathione supplementation with healthy lifestyle choices that minimize toxic heavy metal exposure, you can dramatically improve cognitive and neurological development and function throughout the aging process.

The antioxidant benefits of glutathione are extraordinary, this is why it has earned the title of the body’s “Master Antioxidant”. Found in every cell, glutathione scours our body for toxins, free radicals and heavy metals that pose a threat to our health and well-being. Acting like a magnet, it gathers up all of these harmful substances and expels them from the body.

In its active or reduced form, GSH acts as a powerful antioxidant, once used up or oxidized, it begins the recycling process. The efficiency of this recycling process determines the ratio between reduced and oxidized GSH in the body. The more reduced glutathione in your system the better, it is an indication of low cellular toxicity levels and a strong immune function.

Because glutathione is heavily involved in the detoxification of our body, it is no surprise that it is found in its highest concentrations in the liver; the body’s most important detoxifying organ. Glutathione is also closely linked to liver health and function, when GSH levels are high, the workload put on the liver is reduced and it has a chance to repair itself. This helps reduce liver inflammation which is the cause of liver cirrhosis and impaired liver function.

Many people have compromised liver health due to poor diet, lifestyle choices and the constant toxic bombardment threatening our health everyday. Supporting liver health is one of the most beneficial things anyone could do for their health. Reducing body toxicity and supporting immune health

Heavy metals and free radicals cause severe damage to our brain, and they are particularly difficult to get rid of. This is due to the highly selective permeability of the blood brain barrier. There are only a select number of antioxidants capable of passing through the blood brain barrier to detoxify and repair the brain. Increasing the availability of these antioxidants can help provide the brain with the tools necessary to repair the damage done as well as prevent further damage.

Heavy metals pose a particularly high threat to our cognitive health and function. Accumulating in the brain over years of exposure and causing severe damage to the surrounding brain cells. This can lead to the progression of cognitive disorders such as dementia, Alzheimer’s disease and numerous other issues.
Supporting glutathione levels can help detoxify the brain and ensure heavy metal deposits never get a chance to damage the brain severely. This can help ward off the root cause of many cognitive disorders and even improve cognitive function and memory throughout the aging process. 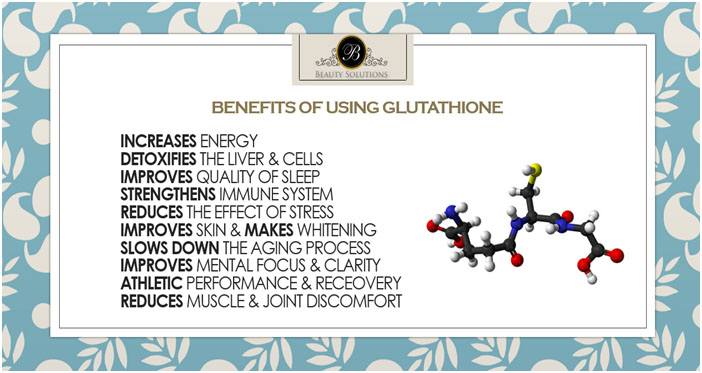